Down the Oregon Trail with Functional C#

In 1971, three students from Minnesota thought they could liven up a history lecture by creating a computer game for the students to play, and after several days of work in HP Time Share BASIC, they came up with what turned out to be a significant milestone in the history of computer games - Oregon Trail.

Oregon Trail is often regarded as one of the first great computer games, as well as being the originator of a franchise that is still running to this day. It was effectively also one of the first instances of both Shareware and a Commercial home release of(depending on the version).

My interest though, isn't just in historical computer games, it's also .NET and Functional Programming. I want to use this as a worked example of one of my passions - Functional Programming in C#! The challenge I've set myself is to redevelop Oregon Trail into C# using the following restrictions:

* Near 100% unit test coverage
* No variables can change state once set
* No statements (for, foreach, if, where, etc.) unless there literally is no way of avoiding them

I'll also be demonstrating a few of the tricks Functional Programming can offer, like Higher-order functions, functional flows with simple Monads and Tail Recursion. There should also be a bit of retro computing fun, while we're at it. 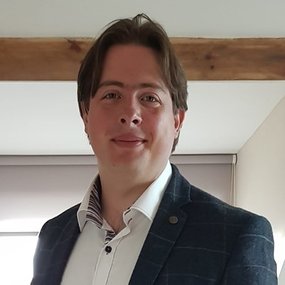 I've been working as a .NET developer for over 16 years now in a variety of industries including government, retail and manufacturing. But I've been hacking around with computer code since I was old enough to read my Dad's copy of the ZX Spectrum BASIC coders manual.

I've been speaking about Functional C# at various user groups and conferences around the UK, USA, Europe and Australia and am particularly interested in seeing just how far we can push C# without breaking it.

I'm currently working on a book for O'Reilly publications about functional programming with C#. Expected to appear in bookshops some time in 2023.

When I'm not coding, or running after my two small children, I have been known to enjoy the classic series of Doctor Who, Fighting Fantasy Gamebooks, Cryptic Crosswords, and rather more coffee than is probably good for me.

All good!
Don't want it